Options can now have a parent option, and the value of option inherits from parent when it is null (if null is allowed).

The command /set shows the inherited value (and the default inherited if the value is set to null). Script iset.pl has been updated as well (version 4.0 supports this feature, and is compatible with old WeeChat).

Screenshot of this new feature (click for full size): 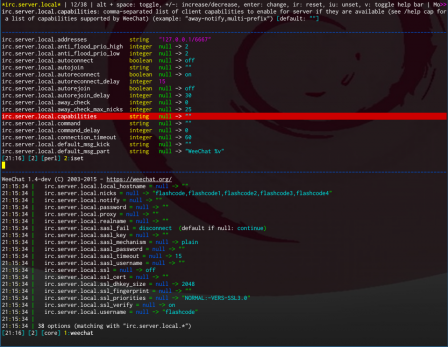 Hex dump of IRC messages can now be displayed in raw buffer, this can be useful to debug problems with charsets or some special chars.

It is displayed if debug is set with a level >= 2 for the irc plugin, for example: /debug set irc 2. 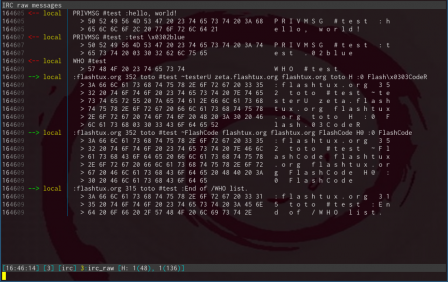 The support of a new SASL mechanism called "ecdsa-nist256p-challenge" has been added three weeks ago.
This new mechanism uses a challenge with public/private key, so no password is required to connect.

Instructions to configure and use this mechanism are in user's guide: https://weechat.org/doc/devel/user/en/#irc_sasl_authentication.

The IRC smart filter... even smarter!

A new option has been added for the IRC smart filter: irc.look.smart_filter_join_unmask, with default value 30 (in minutes).

IRC plugin will automatically unmask a filtered join of a nick, if he spoke within N minutes after the join (N being the value of new option irc.look.smart_filter_join_unmask). Moreover, nick changes are tracked, and will be unmasked with the join.

Events triggering the unmask of join are: a message (can be CTCP), a notice or an update of topic.

Backlog for irc protocol in relay

Backlog has been added for irc protocol in relay plugin.

The relay plugin now supports server capability "server-time", to include the messages time as tag (not in the message itself).

5 new options have been added:

The tag "time" is now read and is used to set the time for the message displayed.

The "znc" IRC bouncer is using this tag with the capability "znc.in/server-time-iso" (name should change in the next release). For example if you are using a server called "znc" in WeeChat, you can do:

It is now possible to redirect IRC commands to a callback, in plugins/scripts.

First you have to add a hsignal with callback, to receive command output. Then, add redirection by sending a hsignal, and send your command to IRC server. It will automatically use your redirection.

You can create your own pattern with signal "irc_redirect_pattern".

Examples of redirection and pattern creation are available in WeeChat devel doc.

Disable highlights from some nicks

It is now possible to disable highlights from some nicks, per buffer, or per group of buffers (like IRC servers).

A new buffer property "no_highlight_nicks" has been added. It can be set easily with script buffer_autoset.py, see /help autosetbuffer for example.

If you have already opened buffer, then script option will not apply immediately to buffers. Then you can use /buffer command to manually set this property on a buffer, for example, to disable highlights from "joe" and "mike" on current buffer:

Update on 2010-12-02: this option has been replaced by "hotlist_max_level_nicks", see Max hotlist level for some nicks.

It is now possible to use SASL authentication with IRC server, using two mechanisms: "plain" (default) or "dh-blowfish" (crypted password).

New options have been added to servers:

You just have to setup username (your nick) and password (password of nick) and then connect to server, you'll be identified with SASL if all is ok.

If you want to set "dh-blowfish" by default for all servers:

A new IRC output queue has been added in irc plugin, with high priority. There are now two queues for messages sent to IRC server:

Accordingly, anti-flood option has been split into two options:

New commands have been added to IRC plugin: /allchan and /allserv.
These commands can execute a command on all buffer of all channels or all servers, with optional exclusion of some channels/servers.

Old commands /amsg and /ame are now replaced by aliases. If you're upgrading from recent version (>= 0.3.0), you have to manually create alias, see page with release notes.

New options have been added to choose target buffer for IRC messages.

New options have been added to check SSL certificates when connecting to IRC servers, thanks to kolter's patch:

Please note that ssl_verify is on by default, so verification is now stricter, and may fail even if it was ok with previous versions of WeeChat.

Note: it is possible to concatenate many CAs in file CAs.pem.

It is now possible to customize CTCP replies, or block some CTCP queries (do not reply).

For example, to customize reply to CTCP "VERSION", use following command:

If you want to block CTCP "VERSION" (do not reply to a query), then set empty string:

Even unknown CTCP can be customized, for example you can reply to CTCP "BLABLA":

It is possible to customize CTCP for one server only, using its internal name before CTCP name:

If you want to restore standard CTCP reply, then remove option:

Support for many proxies

Support for many proxies has been added. It's now possible to create many proxies, and assign different proxy (or no proxy) for each IRC server.

To create, delete, list proxies, use new /proxy command. New IRC option for each server is irc.server.xxx.proxy = name, where name is the name of proxy to use for connection.

For example, to define a http proxy and use it only on freenode server:

To enable it, use following commands:

You can setup delay: /set irc.look.smart_filter_delay 5

How does it work?

When a nick spoke on channel during past X minutes (where X is delay irc.look.smart_filter_delay), its join/part/quit will be displayed by default. Otherwise, if nick did not speak for a long time, all join/part/quit messages will be tagged with "irc_smart_filter". So you have to define a filter on this tag to hide join/part/quit from users that are not speaking on channel (see command above).

The new /ignore command is now available. You can ignore nicks (or hostnames), using regex.

Note: this command will be improved in near future with more options.

Some exemples (you can find them with /help ignore):

Filters have been added. This feature replaces old /ignore command for IRC, but is more powerful and is not specific to IRC, it applies on buffer content. With new /filter command, you can ask WeeChat to filter lines displayed, by tags and/or regular expression on content of line. Unlike old /ignore command, the /filter command only hides lines, they are not removed, and you can see them when you want.

To understand filters, you should know what are tags. Each line displayed in a (formated) buffer may have optional tags, which are one or more words for this line. Number of tags is not limited, but should be reasonable (4 or 5 max). Tags are not visible (not displayed in buffer), they are used to filter content of buffers.

Some examples of filters:

You can enable/disable filters by /filter command (look at /help filter) or with shortcut key meta + "=".

In a later version, you'll be able to see indicator in status bar, to know if filters are enabled or not, and if something is filtered on current buffer (lines hidden). This will be possible with new bars.